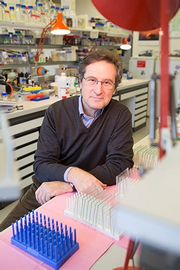 Michael N. Hall received his Ph.D. from Harvard University in 1981, and was a postdoctoral fellow at the Pasteur Institute (Paris, France) and the University of California, San Francisco.  He joined the Biozentrum of the University of Basel (Switzerland) in 1987 where he is currently Professor and former Chair of Biochemistry.  Dr. Hall is a world leader in the fields of TOR signaling and cell growth control.  In 1991, Hall and colleagues discovered TOR (Target of Rapamycin) and subsequently elucidated its role as a central controller of cell growth and metabolism.  The Hall group also discovered the two TOR complexes TORC1 and TORC2, and originally described the two signaling branches mediated by these two complexes.  TOR is a conserved, nutrient-, energy- and insulin-activated protein kinase.  The discovery of TOR led to a fundamental change in how one thinks of cell growth.  It is not a spontaneous process that just happens when building blocks (nutrients) are available, but rather a highly regulated, plastic process controlled by TOR-dependent signaling pathways.  As a central controller of cell growth and metabolism, TOR plays a key role in development and aging, and is implicated in disorders such as cancer, cardiovascular disease, diabetes, and obesity. Dr. Hall is a member of the US National Academy of Sciences, has received numerous awards, including the Cloëtta Prize for Biomedical Research (2003), the Louis-Jeantet Prize for Medicine (2009), the Marcel Benoist Prize for Sciences or Humanities (2012), and the Breakthrough Prize in Life Sciences (2014), and has served on several editorial and scientific advisory boards.