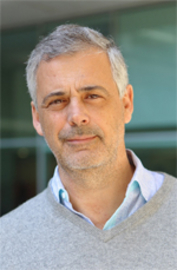 Luis Serrano did his PhD at the CBM (Madrid, Spain) on Cell Biology. Then he spent 4 years in the laboratory of Prof. A.R. Fehrs (MRC, UK) working in protein folding. In 1993, he became Group Leader at the EMBL (Heidelberg, Germany) working in Protein Folding and design. Ten years later, he was appointed head of the Structural & Computational Biology programme at the EMBL and he started to work on Systems Biology. By the end of 2006 he moved back to Spain to lead a programme working on Systems Biology, where he was appointed vice-director before finally becoming the CRG director on July 2011. He is a member of the Spanish Society for Biochemistry and Molecular Biology (SEBBM), member of the European Molecular Biology Organization (EMBO), and member of the Royal Spanish Academy of Sciences (Spain). In 2003 he received the Marie Curie Excellence Award, in 2009 he was awarded the City of Barcelona prize (science category), an annual award organized by Barcelona City Council and in 2018 the Francisco Cobos award (http://fundacionfranciscocobos.org/).  In recent years he has won fiveprestigious grants from the European Research Council, three ERC Advanced Grants and two ERC Proof of Concept grants. He is Professor of ICREA and has directed 20 PhD thesis. He has published more than 360 papers in international journals. He was involved in the creation of one of the first Spanish Biotech Companies (Diverdrugs) in 1999. He is also co-founder of Cellzome, EnVivo, TRISKEL and Pulmobiotics biotech companies. He has been Director and Founder of the association of European Institutes of Excellence EU-LIFE (https://eu-life.eu/) and of the association of Spanish institutes of excellence, Severo Ochoa and Maria de Maeztu (SOMMa; https://www.somma.es/). Currently his research is focused on the engineering of bacteria to treat human lung diseases.