Mouse models for the expression of oncogenic viral proteins

Mouse models can help to better understand how oncogenes influence the signalling pathways of normal cells, thereby leading to malignant transformation. In recent years, BIOSS-B2 researchers have established several mouse models for human tumour diseases by generating mice that allow the inducible expression of oncogenes. This enables BIOSS-B2 to test the function of the same oncogene in different cell types. Our previous results have shown that the protein tyrosine kinase Syk acts as proto-oncogene in several B cell leukaemia (including human chronic lymphocytic leukaemia). Syk is involved in signal transduction and activation of many cell types including cells of the hematopoietic system and epithelial cells. Although Syk seems to play an important in the induction of signalling pathways that regulate activation, proliferation and the survival of cells, the molecular mechanisms leading to elevated Syk activity in transformed cells is still not completely understood. It is conceivable that deregulated Syk activation can be caused by overexpression of Syk through gene duplications for example or by translocations that produce a hyperactive form of Syk. Alternatively, deregulated Syk activation might be induced by a change in the amount of available proteins that contain ITAMs (immunoreceptor tyrosine-based activation motifs)-containing. ITAMs are central signalling motifs that can be found not only the in the cytoplasmic tails of different receptor complexes such as antigen receptors in lymphocytes, but also in virally encoded oncogenes. Indeed, several viruses involved in human cancer encode ITAM-containing proteins such as the Epstein-Barr-Virus (EBV)-derived latent membrane protein 2A (LMP2A) or the K1 protein of Kaposi’s sarcoma-associated herpes virus (KSHV). Experiments with cell lines showed that these ITAM-containing proteins induce transformation. Since ITAMs are phosphorylated upon receptor engagement and serve as binding sites for the activation of Syk, we propose that an increase in the availability of ITAM-containing viral proteins may shift the equilibrium towards active Syk and contribute to the transformation of infected cells.

By generating mouse strains for the inducible expression of the above-mentioned ITAM-containing viral proteins, BIOSS-B2 aims to test this hypothesis and investigate the molecular mechanisms that are involved in virus-mediated transformation of different cell types. 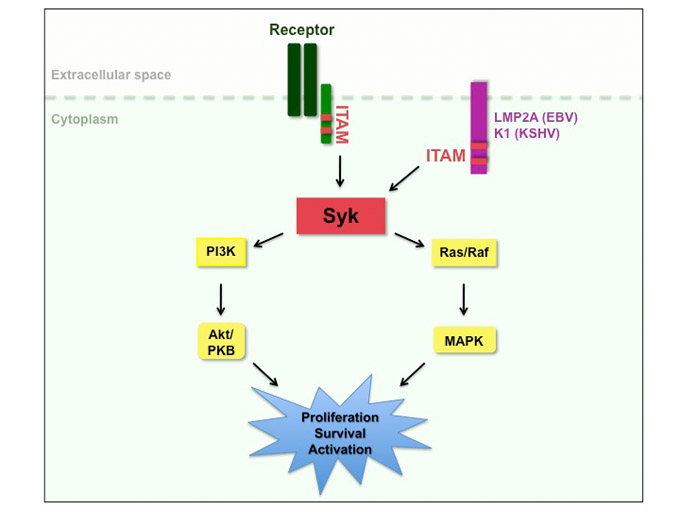