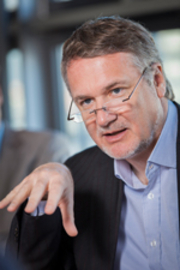 Patrick A. Baeuerle studied biology at the universities of Konstanz and Munich (LMU) and holds a M.Sc. from the University of Konstanz and a Ph.D. (summa cum laude) from the LMU. He trained at the Max-Planck Institute for Psychiatry in Martinsried and at the European Molecular Biology Laboratory (EMBL, Heidelberg) with Prof. Wieland Huttner. Patrick’s graduate work was on tyrosine sulfation and protein transport. He performed post-doctoral training with Nobel laureate Dr. David Baltimore at the Whitehead Institute for Biomedical Research at the Massachusetts Institute of Technology (Cambridge, Massachusetts, USA) where he discovered IkappaB and RelA (p65) subunits of transcription factor NF-kappaB, and deciphered the canonical pathway of NF-kappaB activation.

Back in Germany, Patrick led an independent research group at the GeneCenter of the LMU in Martinsried (Director: Prof. Ernst-Ludwig Winnacker) where he continued to work on various aspects of transcription factor NF-kappaB. His habilitation at the LMU was in 1992. At the age of 34, Patrick was called to the University of Freiburg as Professor and Chairman of Biochemistry to its Medical Faculty. After less than three years in Freiburg, he moved to California to head up small molecule drug discovery at Tularik, a biopharmaceutical start-up company based in South San Francisco.

From California, Patrick moved back to Martinsried in 1998 where he became Chief Scientific Officer of Micromet, a biopharmaceutical company founded by Prof. Gert Riethmueller and colleagues at the Institute for Immunology of the LMU. Over the years, Micromet became a pioneer in the industry in the development of T cell-engaging bispecific (BiTE) antibodies for cancer therapy. Its CD19/CD3-bispecific BiTE antibody blinatumomab and drug pipeline led to the acquisition of Micromet by AMGEN in 2012. Blinatumomab was approved by the FDA in 2014 in less than three months as Blincyto®, a therapy for treatment of patients with relapsed/refractory acute lymphoblastic leukemia. Patrick served for the following three years as Vice President of Research and General Manager of AMGEN Research Munich GmbH, a newly founded research hub of AMGEN in Munich.

In 2015, Patrick joined the US-based venture capital firm MPM Capital LLC as an Executive Partner. Since then, Patrick has co-founded a total of seven portfolio companies at MPM: Harpoon, iOmx, Maverick, TCR², Werewolf, Aktis Oncology, and Cullinan Oncology, where he is the acting CSO of Biologics. Patrick serves on the board of directors of TCR2 and iOmx, is a scientific advisor to Harpoon, iOmx, TCR2, Werewolf, Aktis Oncology and TCR2, and an investment committee member of the UBS Oncology Impact Fund (OIF), an oncology-only crossover fund (both private and public equities) managed by MPM. In the meantime, three of Patrick’s companies went public on NASDAQ: TCR2 (TCRR), Harpoon (HARP) and Cullinan (CGEM), and one, Maverick, was acquired by Takeda.

Patrick is the recipient of Xconomy’s 2019 Entrepreneur (“X”) of the Year Award, and EMBL’s 2019 Lennart Philipson Award in recognition of his many contributions to the development of cancer immunotherapies. To date, he has published 245 PubMed-listed papers that have been cited more than 76,000 times. He currently has a Hirsh index of 132 and was rated to be among the top 0.01% of most frequently cited scientists (Stanford study by Ioannides et al., 2019).